“You’ll be needing a ship if you want to
be able to move about more freely.
If you have trouble obtaining one
through normal means, you could always
“borrow” a pirate ship…”

Now that we have crossed the bridge, it’s time to explore this new continent! First, let’s proceed north.

Here we find a cave that is the home of a witch named Matoya. It seems that she has lost her crystal eye, and cannot see. Being the Light Warriors, we naturally want to help her out, but who says that we should do it for free? Help yourself to the three treasure chests in the room, two of which contain a potion, and the other an antidote.

Before leaving, speak with one of the brooms. It will tell you a riddle, that when solved will reveal a “magic” spell. It’s not hard to figure out. Just read the message backward. “Tceles Nottub B” becomes “B Button Select” Translation: hold down the B button and press select at the same time. Doing this will reveal a map of the world, but only if done outside.

Now that we’ve seen Matoya and collected her “payment”, it’s time to finish exploring the continent. Since we can’t go west anymore, I guess that is a sign that we move east! After crossing a desert, a forest, and a swamp, we find ourselves at the town of Pravoka. Upon entering, you will notice that there are very few people around, with the exception of the “Mohawk Man” in front of the Inn. It is very apparent the reason why. Bikke the Pirate and his scurvy crew are terrorizing the town. Perhaps we should put a stop to that. 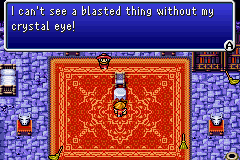 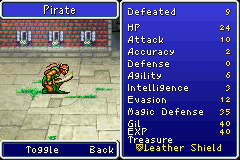 This fight is considerably easier than it was on the original version of Final Fantasy, so much so that I almost hesitate to call it a boss fight. Early versions of the game didn’t “auto-target” if a party member attempted to attack an enemy that was defeated earlier in the round, which meant this fight could drag on for some time if attacks weren’t properly planned.

The Pirates are similar in strength to a Goblin, and there are only nine of them. Unless you were already near death when the battle began, you should have absolutely no problem here.

After defeating the Pirate Crew, Bikke will reward you with his ship! I guess he doesn’t know how to sail on his own, now that his crew is out of the picture. The citizens of Pravoka will once again take to the streets, and all of the various shops will be open for business. I recommend picking up the Broadsword for your Warrior and Red Mage, and a Scimitar for your Thief. Iron Armor is amazing, and should be purchased for your Warrior. It’s a touch on the expensive side, but will carry you through the next two chapters. Everyone can equip Leather Gloves, so if you have extra money, go ahead and buy a pair for everyone.

The Level 2 White and Black Magic spells are a little lackluster. I definitely recommend NulShock for White Magic and Blizzard for Black Magic. A secondary suggestion would be Blindna on the White side and Temper on the Black side. As always, I’ll only ever give two recommendations for magic each level; You’re free to pick a third spell that complements your play style, or save money and not fill out your spell book entirely. 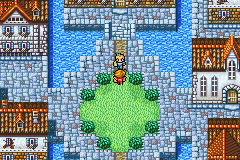 Mister Mohawk: The hero Pravoka needs, but not the hero it deserves.

A hammer made for battle.

Sword with a wide, double-edged blade.

An axe made for battle.

A sword with a curved blade.

Armor made of hardened leather.

Armor made of thinly hammered iron.

A shield made of hardened leather.

Gloves made of leather.

Prevents all foes from casting spells.

Reduces lightning damage by half.

Deals ice damage to one foe.

Blinds all foes with darkness.

Reduces all foes’ number of attacks.

After you finish shopping in Pravoka, it’s time to take to the open seas! Besides the obvious benefit of allowing access to previously unreachable locations, and being twice as fast as walking, the ship also has a secret: A hidden mini-game! If you hold the A button down and press the B button many times, you will be brought to a number sequence puzzle. (The exact number of B presses varies from version to version, with 55 being the highest, and 22 being the lowest.) There are prizes that are awarded based completion time, and the faster you go, the better the prize. Here you can find a List of Prizes.

After you’re done amusing yourself with the various capabilities of your new ship, it’s time to go and visit the Elves. The easiest way to get to Elfheim is to follow the northern coast until you get back to Cornelia, then travel straight south. You should see a port once you reach land again. A quick jaunt through a little forest should take you to the Elven City of Elfheim. You can visit the castle and say “hi” to the sleeping prince if you want to, but there is no need. 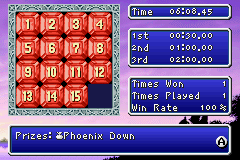 You probably don’t have any money at this point, especially if you bought everything at Pravoka that I recommended. That means it is time to earn some gold! If your HP is still high after the trip from Pravoka, great! If not, take a quick snooze at the Inn in Elfheim. When you are ready, leave the city and head due east. You should find yourself in a large, grassy plain. Now it’s time to hunt Ogres!

Your first couple of battles may be a little difficult, especially if you come across a pair of Ogres! Don’t be afraid to run away if you have to. When your HP get low, you should return to Elfheim for a break. You may also notice that two creatures, the Cobra and the Tarantula, have a tendency to poison you. It is important to note that poison is NOT cured by a stay at the Inn. It can only be cured with an antidote or the Poisona spell. If your supply of Antidote starts to dwindle, you better get some more before you find yourself poisoned in the middle of the wilderness! It shouldn’t take long before you have enough money to purchase everything that I have mentioned. Don’t worry about being a specific level at this point. Your level will be high enough after earning all of that Gil! 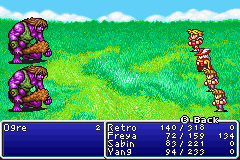 Magic is where most of your budget will go when you start shopping. L3 Black Magic provides the best bang for your buck in the Fira spell, and I recommend it as your first purchase. Thundara is my second recommendation for L3 Black Magic; It won’t prove particularly useful in the short term, but it’ll be invaluable later in the game. For L3 White Magic I recommend Cura and NulBlaze.

L4 White Magic is a bit lackluster; My only recommendation is NulFrost. Poisona is an option, but Antidotes are cheap: You’ll likely spend less Gil on Antidotes than you will on the Poisona spell throughout the game, especially if you’re playing a version where Poisona costs 4000 Gil. Black Mages, on the other hand, have access to the game’s most effective spell at L4: Haste. This spell will double the damage of your melee team members, making this the most valuable spell in every boss fight from here until the end of the game. Blizzara is a no-brainer for the second L4 recommendation, and completes the second-level elemental trifecta.

There are no weapons in Elfheim worth purchasing, unless you’re playing a version of the game where the Mythril/Silver Sword is available. The Armor selection is very similar to that of Pravoka for the melee members of your team. I recommend the Copper Armlet for the Black and White Mages, the Iron Shield and Helm for the Warrior, and Leather Caps for everyone except Monks. Depending on your levels, this is the time of the game where Monks start transitioning to “naked” mode: Be sure to unequip everything from them and check that any weapons and armor are actually increasing their stats. The auto-equip is notorious for reducing the effectiveness of Monks by placing any available equipment into an equipment slot, even if it lowers the Monk’s natural stats. 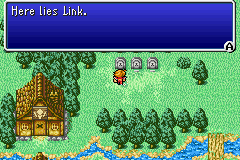 Nunchaku made of iron.

A staff topped with an iron ring.

A long sword made for piercing.

Armor made of thinly hammered iron.

An armlet crafted from copper.

A shield wrought from iron

A cap made of leather.

Restores HP to one ally.

Deals damage to all undead foes.

Reduces fire damage by half.

Restores a little HP to the entire party.

Deals fire damage to all foes.

Deals lightning damage to all foes.

Lowers evasion of all foes.

Drives all foes away in terror.

Reduces ice damage by half.

Puts one foe to sleep.

Doubles one ally’s number of attacks.

Causes foes to turn on each other.

Deals ice damage to all foes.

Now that we have the latest and greatest in weapons and armor, let’s go find a use for them! It’s time to begin the first “quest chain” in Final Fantasy I.